Before first entering parliament in 1974, Brian was civil servant, a barrister and occasional contributor to Private Eye. He was also a published author of both fiction and non-fiction.

A firebrand of the left in his early years, opposed to Europe and aligned with Tony Benn, Brian Sedgemore's views altered over the years, falling out with the Labour leadership by voting in favour of the Maastricht Treaty in 1993 and later opposing both the Iraq War and Tony Blair's various u-turns over tuition fees. 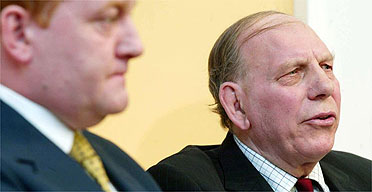 In many ways an old-school liberal well before his move to join the Lib Dems in 2005, Brian was a prominent humanist and secularist who said he could not accept Tony Blair's "scorn for liberal Britain."

Responding to the news, Reuben Thompson, Chair of Hackney Liberal Democrats, said, "I had the considerable pleasure to know Brian as both a kind and sage friend, and as a formidable political opponent at different times.

"His Parliamentary oratory was amongst the finest in recent memory and his commitment to civil liberties, justice and the most deprived in society marked him out as the right kind of politician throughout his long career. Politics in Britain is so much the poorer for his passing."