The second London hustings between Ed Davey and Jo Swinson took place on Monday Night at the London School of Economics in Aldwych, and I was perched way up high in the gallery, so it was fortunate that both candidates were wired for sound and all the mics worked!

[Heads up - this is one of Ben's trademark long, rambling blog posts. Maybe put the kettle on!]

The evening was hosted by the New Statesman magazine, with political editor, Stephen Bush our compere.

Jo spoke first, wearing a pair of fabulous silver shoes. I only mention this because so was I, and while I maintain that mine are better, it was nice to think our future leader might share my sense of style! She spoke about how she once had lectures in that very same auditorium and welcomed all the recent new members. 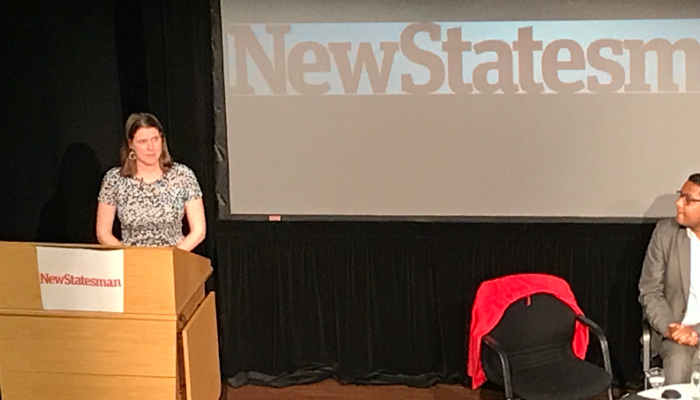 She laid out her stall as one of taking on populists and nationalists (mentioning Boris Johnson and Nigel Farage specifically) and said that the worst day of her life was not the 2015 election when she and her husband (Duncan Hames the former MP for Chippenham) lost their seats, but the morning after the EU referendum - specifically recalling the Farage's crass declaration that Leave had won "without a shot being fired," seeming the forget that Jo Cox had been murdered just days before.

Jo talked about her campaigning history as a student, as an MP and later as a government minister, touching on issues from internet access to excess packaging to rogue employers who don't pay minimum wage.

Overall the whole evening was a bit flat for me, because - no big surprise - both candidates are Lib Dems, both agree on most of the issues, but Jo's big message came at the end of her speech when she talked about not just being a party that says "No" - even on Brexit - but a party that puts forward a positive vision for the country. We're against Brexit, but we need to talk more about why Europe is good; against climate change, but we need to talk about why a greener economy is better for everyone.

For me that's a big selling point. The party might save money by having universally applicable placards that just read "Lib Dems say NO" but it's not a vision. 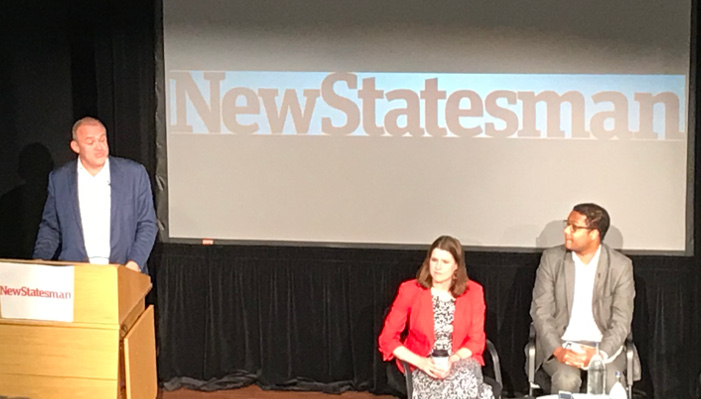 On to Ed Davey, who seems to have given up insisting on being called "Sir Edward Davey." Ed's speech struck a slightly more bombastic tone, opening with the fact that this is the first contest for 100 years where Liberals have just outpolled both Labour and the Conservatives in a national election. We are, in his words, "back in the game" and he told members that the next leader's job was to "win the game," although he steered clear of anything quite so hubristic as "go back to your constituencies and prepare for government."

Since I commented on Jo's shoes, It's only fair I should note that Ed was wearing a perfectly smart grey suit and, unlike certain other politicians vying for leadership positions in other parties, both his socks appeared to match and neither was inside out!

Ed has spent longer in frontline politics than Jo, so he had a few more stories to tell - from winning his seat in 1997 when he wasn't a target constituency, to tabling the motion to scrap the homophobic Section 28 law, to his time as Energy Minister, which he spent pushing green issues as only a self-confessed "proud tree-hugger" could.

But when it came to the vision, I found Ed's pitch a little fuzzy. He's in favour of the NHS and he wants us to be compassionate but the buzzword of "Hope" was a little bit 2008 for me. 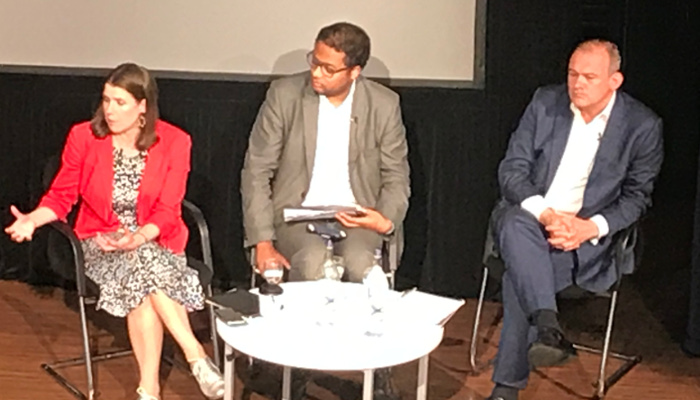 The question and answer session was an opportunity for a few extra nuggets. Ed let slip that rumours of potential defections from Labour and the Conservatives are real, if not yet official and if you see Jo chatting to someone over a cup of tea it's almost certainly a conspiracy! Jo loves Fleabag and Game of Thrones (but hasn't seen the final season yet) and Ed is still hooked on political skandi-drama Borgen. If he weren't such a liberal, Ed would ban "man bun" hairstyles and Jo would like a separate lane on the pavement for people who walk too slowly - two policies I can see being quite popular myself!

More serious questions came up about Heathrow expansion (both candidates are against it), Climate change (both candidates are against it), homophobia and transphobia (you guessed it, both opposed) and working with other Remain-supporting parties (both broadly in favour but let's see what happens). As you may be starting to realise, neither Jo nor Ed was significantly out of step with either party members or one another!

The last time we had a full-on leadership campaign in 2015 I had very firm views about the candidates and maybe one day I'll tell you about them - suffice to say, my guy lost! This time I'm more torn. Both candidates are brilliant MPs, good on policy, good speakers and would be great leaders.

On this and past performance, I find Jo more charismatic, while Ed can come across as a bit hunched and awkward. When Jo Swinson is on form, with or without her "Feminist Horse," there are few better communicators in the party - but if Lib Dems find ourselves within a sniff of the Cabinet table any time soon, Ed could sit straight back down and pick up where he left off.

It's a tough choice, but thank your lucky stars you're not a Conservative. While we try to decide between cheesecake and gateau, they can only vote for a poke in the eye or a kick in the head!