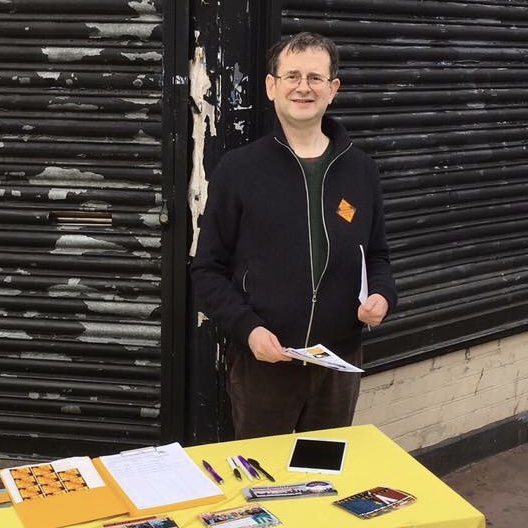 Former Hackney parliamentary and Mayoral candidate Simon de Deney was elected Vice Chair along with Pauline Pearce and Press & Social Media Officer Darren Martin, with the three Vice Chair roles aiming to look at specific areas of policy development and community engagement.
It is a very strong team with new members joining experienced campaigners such as former head of the Hackney Stronger In campaign during the EU referendum Dave Raval and Pippa Morgan who was a key team member for party leader Vince Cable's successful reelection bid in the 2017 General Election.

In a statement Geoff Payne said:

"After a huge boom in local party membership this is a very exciting time to be chairing Hackney Liberal Democrats. Over the past 6 years we have had 2 referendums; one on changing the voting system and one on whether to stay in the EU. On both occasions Labour were unsure and divided whilst Hackney voters showed decisively that they are very much in the Liberal camp in supporting a fairer voting system and for remaining in the EU.
Hackney is also at the epicentre of the Environmental movement in the UK - something Liberal Democrats feel very strongly about. We are very proud of our 3 Cazenove councillors who are working hard in their unifying their local Muslim and Jewish communities at a time when division and conflicts in the Middle East make that harder. We embrace diversity in all of it's forms.
We need to work hard to tackle the everyday struggles of the people in our borough and I am proud of the work done by my colleagues Darren Martin campaigning for sprinklers in the tower blocks, and Pauline Pearce in dealing with the fallout from the tragic death of Rashan Charles. We need a police force that is better resourced and is joining up with the communities that it serves and we need more youth service facilities for local young people. We need to slow down the gentrification of Hackney that is driving local people out of the borough.
Whilst the hard left has divided and taken over the Hackney Labour party, we in contrast offer radicals and progressives a friendly welcome into our Liberal Democratic party, where your voice will count. We aim to keep up the good work in 2018 and you are welcome to join us".

"We have such a wealth of talent brought in by our new members with expertise in education, business, law and community activism. We will be working with our members to help develop a working opposition that can not only hold the Town Hall to account but can be a genuine council in waiting.
Just looking at some of the recent consultations held by Hackney Council, it is clear there is a paucity of ideas and a lack of any real desire to work to find them. That is a consequence of Labour feeling so secure that they think they can get away with poor policy.
We will work hard to change that in 2018 and into the future."